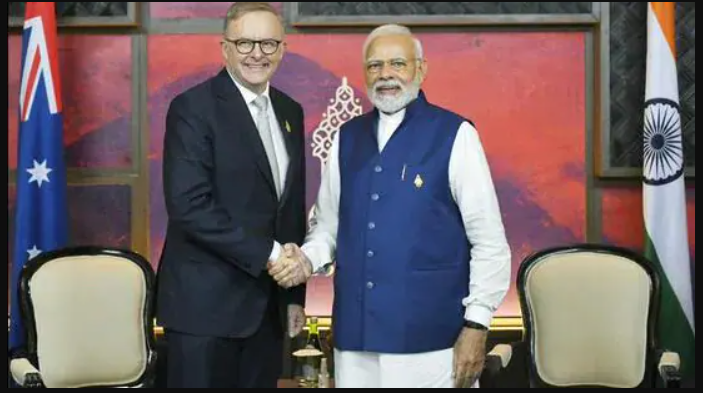 The Australian government on Wednesday welcomed the Indian side’s confirmation that all requirements had been completed for the implementation of the Economic Cooperation and Trade Agreement, which was signed on April 2.

A trade deal between India and Australia is set to enter into force from December 29 after the Indian government completed domestic requirements to enable its implementation, leading to benefits for the country’s IT industry, students, and labour-intensive sectors.

The Australian government on Wednesday welcomed the Indian side’s confirmation that all requirements had been completed for the implementation of the Economic Cooperation and Trade Agreement (ECTA), which was signed on April 2. This was India’s first trade deal in a decade with any developed country.

Australia finalised its domestic requirements for the trade agreement last week with the unanimous passage of government bills through both houses of Parliament.

An Australian government statement said the implementation of the deal will lead to two tariff cuts by January 1.

Entry into force of the agreement before the New Year delivers a double bonus of two tariff cuts in quick succession: one as the agreement comes into effect and a second on 1 January 2023,” the statement said.

“The date is set! The Economic Cooperation and Trade Agreement will enter into force on 29 December, delivering new market access opportunities for both countries & securing the [Australia-India] friendship in the decades to come,” Australian high commissioner Barry O’Farrell tweeted.

Indian officials have said the deal is expected to take two-way trade to $45 billion to $50 billion in five years from the existing $31 billion, and India’s merchandise exports to Australia are expected to jump $10 billion by 2026-27 from $7 billion. Two-way trade also has the potential to create more than a million additional jobs in India, besides increasing remittance flows to the country, they said.

ECTA will save Australian exporters around $2 billion a year in tariffs, while consumers and businesses will save around $500 million in tariffs on imports of finished goods, and inputs for Australia’s manufacturing sector, the statement said.

Tariff commitments provided by India in the deal will open up access for Australia’s exports such as critical minerals, pharmaceuticals, cosmetics, lentils, seafood, sheepmeat, horticulture, and wine.

Australian services sectors that will benefit include higher education and adult education, and business services such as tax, architecture, and urban planning.

ECTA will also support tourism and workforce needs in regional Australia by offering 1,000 work and holiday programme to young Indians. It will also allow Indian students graduating in Australia to undertake post-study work, with a bonus year of stay for high-performing STEM graduates.

India and Australia are working on a Comprehensive Economic Cooperation Agreement to build on ECTA. “The Australian government is pursuing further opportunities in goods and services, in addition to new commitments in areas such as digital trade, government procurement, and new areas of cooperation,” the statement said.

Australian Prime Minister Anthony Albanese said: “Australia and India are increasingly working together as strategic and economic partners…The Australia-India Economic Cooperation and Trade Agreement is the next step in elevating our relationship with India, the world’s fastest-growing large economy.”

India is Australia’s ninth-largest trading partner, and the balance of trade is in Australia’s favour. During 2021, two-way trade in goods and services was worth $27.5 billion, with India’s exports valued at $10.5 billion and imports at $17 billion.

London: Australian savings could be poured into major Indian projects under plans aired by Prime Min...

MELBOURNE:  Australia has released a report on its economic strategy for India recommending that Ind...

A landmark report on Australia’s engagement with India, which suggests China is a bully trying...